Although there were women detectives in American popular fiction as early as 1883 (Clarice Dyke, by Harry Rockwood), Anna Katharine Green’s (1846 — 1935) aristocratic spinster Amelia Butterworth was the best-known, premiering in That Affair Next Door (1897). Over fifty of these titles are still in print. As Frances A. DellaCava and 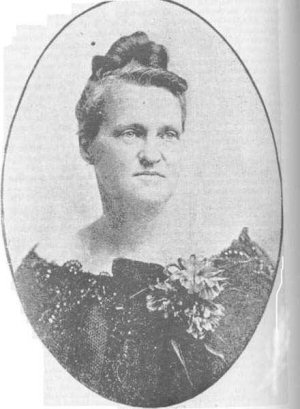 Madeline H. Engel show in their survey, however, the characterization of early female detectives followed the English line of development: “middle class, genteel, single women whose detective style is purely intuitive.” 1 They were retired schoolteachers, society matrons, nurses, nuns and shopkeepers, none trained in law enforcement and most employing “feminine psychology” to solve cases. The pulps, such as Black Mask, had featured a few detective couples, but they were written by men, although the editor of that magazine in its later days was a woman. The Butterworth line of detection eventually merged with the genteel British school of Agatha Christie. (Right: Anna Katharine Green)

Her main character was detective Ebenezer Gryce of the New York Metropolitan Police Force, but in three novels he is assisted by the nosy society spinster Amelia Butterworth, who commanded  more reader interest. In some respects Butterworth set the stage for Miss Marple, Miss Silver and other creations. Green also invented a ‘girl detective’ named Violet Strange, a debutante sleuth, but this is not hard-boiled.

Although Green was progressive —succeeding in a genre dominated by men — she did not approve of feminism and was opposed to the suffrage movement. In 1884 she married the actor and furniture designer Charles Rohlfs, who toured in a stage version of The Leavenworth Case.