Michael Connelly (1945 – ) is the dean of contemporary Los Angeles detective writers.  He is the creator of  Detective Harry Bosch, as well as defense attorney Mickey Haller. He was born in Philadelphia, graduated from the University of Florida in 1980, then worked as a crime beat writer at newspapers in Daytona and Ft. Lauderdale, where he covered South Florida’s cocaine wars and was among those nominated for a Pulitzer. 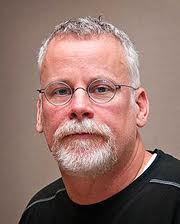 He moved to the Los Angeles Times, where after three years Connelly wrote The Black Echo, which was the first novel featuring his primary recurring character, Detective Hieronymus Bosch, a man who, according to Connelly, shares few similarities with the author himself. Named after the Flemish painter, Bosch concerns himself at least partially with redemption in telling most of his stories.

After 2005 most Bosch novels contain a second principal, Rachel Walling or Mickey Haller, and the latter has been spun off into his own series. Most reviewers find Angels Flight the most satisfying of the early work.

Connelly, however, has guaranteed himself a lifetime of sequels by situating his detective in the cold case department. As the New York Times‘ Marilyn Stasio has written, “Bosch’s personal code of honor — “Everybody counts or nobody counts” — could be the mantra for the entire Open-Unsolved Unit of the Los Angeles Police Department, where a dozen detectives defy the odds by working to bring justice to some 10,000 cold cases dating back 50 years.” (NYT 12/16/11)

Books in the Bosch series are:

Connelly has written an exceptional number of New York Times bestsellers,  include Two Kinds of Truth, The Late Show, The Wrong Side of Goodbye, The Crossing, The Burning Room, The Gods of Guilt, and The Black Box. His books, which have been translated into 39 languages.

He is also the co-creator and editor of the TV series Bosch.