Film Noir (“dark film”) refers to a genre of movies that employ hard-boiled protagonists, urban settings, dark tones, and a sense of despair. Most of these movies date from the period of 1940 to 1960 and share similar techniques and styles. The term owes to two Frenchmen, Nino Frank and Jean-Pierre Chartier. These critics were prevented by World War II from seeing The Maltese Falcon, Laura, Farewell, My Lovely; Double Indemnity, and The Woman in the Window, all of which appeared on Paris screens in 1946. Frank claimed that these movies were a new genre, distinct from the preceding crime movies. Chartier found them as dark as the French movies 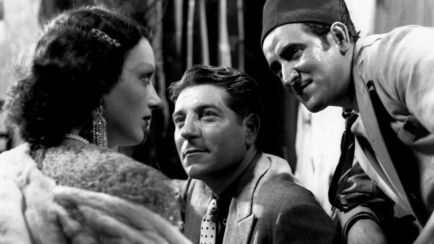 When Raymond Borde and Etienne Chaumeton wrote their pioneering Panorama du Film Noir (1955), they referred to the “sources” of film noir in American hard-boiled writers Hammett, Cain, Burnett, and Chandler. 1 In subsequent decades, however, the origins and definition of film noir have been much debated. Movie historians point out that movies are a different medium, influenced by other movies, such as the crime movie genre. The European expressionist movement in art also affected movies, as did technological advances and economic history, such as the Depression.  1

All scholars agree, however, that by 1945 film noir had its own style and themes, both of which were distinctly American. The concept of film noir employed in this chapter is narrow, excluding most of the crime movies on which film noir is based, as well as thrillers by Alfred Hitchcock and comedies such as The Thin Man series based on Hammett’s novels.

Detectives had appeared in silent movies early, but they did not catch on. The first Sherlock Holmes movies appeared in 1903, and there were “Nick Carter” movies made in France from 1909 onward. Police detective “Bulldog Drummond” appeared in movies in 1922, the year that the famous actor John Barrymore first played Holmes. One problem was that the detective story’s plot required many sub-titles and more complicated camera-work than melodramas. By contrast, audiences liked melodramas, they were easy to make, and they paid well. In the United States, the plot-driven detective movie soon gave way to farce. The police became the subjects of satire in Max Sennett’s enormously popular Keystone Kops comedies. For the ancestors of the hard-boiled film, we must look to a genre known as “crime movies.” Film historians usually link crime movies to D. W. Griffith’s pioneering “slum melodramas” of the silent era. These were fifteen minute, one-reel movies that helped to make poverty and social reform into issues during the Progressive Era (1890-1915). Griffith shot A Child of the Ghetto and The Lily of the Tenements in 1910 and at least six others in 1911. His most famous was The Musketeers of Pig Alley (1912), which featured pimps, drugs, gangs, and a shoot-out. There were even movies about white slavery, such as Traffic in Souls (1913), and drug addiction: For His Son (1913), The Devil’s Needle (1916).

These interests converged in 1927, according to movie historian Carlos Clarens, in Underworld (written by Ben Hecht, directed

by Josef von Sternberg). Hecht had written for Chicago newspapers during the rise of organized crime, and von Sternberg was a German influenced by the Expressionist movement, who saw Chicago as “a great city in the dead of night.” 2 Capitalizing on the Keystone tradition of disdain for police, Hecht wrote a sympathetic male lead named Bull Weed, and von Sternberg played up Weed’s existential aloneness by light-and-shadow effects, halos of street-lights, and neon signs, all future traits of film noir. Sound movies – one of the great changes in narrative — appeared in 1927 with The Jazz Singer. There were several crime movies in the late 1920s, but nothing like the huge success accorded Little Caesar (Dir. Mervyn LeRoy, 1930, below). Based on W. R. Burnett’s novel and starring Edward G. Robinson, this movie convinced Hollywood that crime movies would pay off. Imitators raced to their studios.

The most interesting were Public Enemy (1931), discussed below, and Scarface (1932), boldly modeled on Chicago gangster Al Capone. These movies appeared at a time of technological revolution. Sound required new cameras, new projectors, the sound-proofing of studios and re-wiring of theaters – all huge expenses. Warner Brothers, the pioneer of sound, was losing $300,000 a quarter when it brought out The Jazz Singer. 3 Then it went $5 million in debt betting on the new technology, but in 1929 its profits were an astonishing $14 million.

These films appeared at a time of technological revolution in film. Sound required new cameras, new projectors, the sound-proofing of studios and re-wiring of theaters – all huge expenses. Rivals had to invest huge sums to keep up; soon there were only five major American film producers making seventy percent of all Class A features and collecting seventy percent of all box office receipts.

In 1928 the “Mazda tests” set uniform lighting standards for the industry. These were used to guage film stock for development, like the ASA number on film today. Before the tests, lots of film shot on different days would have different values of light and dark, making it hard to give a consistent “look” to a film. After 1928 the exposure of interior and exterior sets, costumes, and make-up could be planned.

It is often noted that American film noir owes a deep debt to writers such as Dashiell Hammett and Raymond Chandler, who appeared in the pulp magazine Black Mask. The problem with this genealogy is that Black Mask was part of a complex national response to crime that was continually evolving. Those writers and that magazine were important (and are treated below), but a richer understanding of noir narrative would begin with newspapermen such as Jack Lait, Ben Hecht, and William R. Burnett, who chronicled the rise of Al Capone.

These authors were prominent in creating the ‘mass public’ for the later emergence of noir narrative. Before 1930 ‘the causes of crime were not elucidated,’ as Andrew Bergman notes, ‘because there seemed little point to it. Crime was a life style, a way of existing in the world.’ Explanations would come later, as crime itself and the audiences for narrative about it changed. After the initial public for crime narrative formed, there were three successive ‘counter publics,’ each focusing and refining characteristics of its antecedent.

After a brief, violent career in Brooklyn, Al Capone (below) moved to Chicago in 1923.  When his South Side gang took up arms against the North Side gang over bootlegging turf, he made organized crime into a national topic.  The murders, which began in 1924 and peaked with the St. Valentine’s Day Massacre of 1929, fascinated a national readership.  Seven books on Capone appeared between 1929 and 1931.  After Capone’s fall, the newspapers turned to John Dillinger, Baby Face Nelson, Pretty Boy Floyd and Bonnie and Clyde. As some of their names imply, these criminals were supposed to have a ‘style,’ and they redefined myths about individual upward mobility.   Writers such as Jack Lait of the New York Daily Mirror, Damon Runyon of the New York American 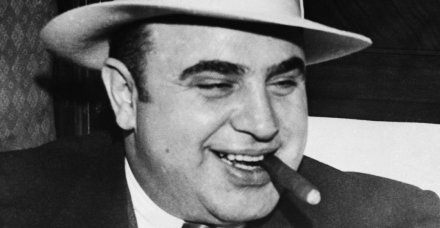 , and Ben Hecht and John Bright of the Chicago Daily News understood Capone and other gangsters as literary capital, and that they could give them a style attractive to Hollywood.
One aspect of this style was argot.  Jack Lait (1883-1954) popularized gangster speech and even compiled glossaries.   His Beef, Iron, and Wine (1916) introduced Americans to ‘yeggs’ who spoke with Brooklyn accents and called women ‘twists.’ Lait gave his gangsters a distinct patois and nonchalance; he was first to elevate the ‘gangster moll’ into a full-fledged character and first to debunk the pseudo-evil of ‘Chinatown’ in his ‘Confidential’ books on New York and Chicago.
Better known was Damon Runyon (1880-1946), initially a sportswriter covering baseball and boxing for the New York American, a beat that led him to the circle of mobster Dutch Schultz. His collected stories of small-time hoodlums,  in Guys and Dolls (1932), were told by an uninvolved first person narrator, entirely in the present tense, employing signature phrases such as ‘ever-lovin’ wife,’ ‘more than somewhat’ and ‘loathes and despises.’  Runyon never used contractions or the conditional voice, and as Adam Gopnik

(below) notes, ‘The Narrator has to be careful; he is telling stories, often, of what elaborate politesse it takes to keep from getting killed, and his care is the source of a lot of his comedy. A wise guy on the lower end of the totem pole is of necessity an expert in courtesy.’  Runyon’s column had a readership of 10 million, and he covered the famous Gray-Snyder Trial in 1927, a source of James M. Cain’s plot for The Postman Always Rings Twice.
Like Capone himself, the chroniclers of crime for the mass public moved west.  Ben Hecht  (1894-1964) began writing for the Chicago Journal when he was sixteen and in 1921 launched  his column ‘1001 Afternoons in Chicago’ at the Chicago Daily News.   Unlike Lait’s and Runyon’s, Hecht’s fictive world is not created by precise demography and geography but through print, theater and other media.  A collection of his columns appeared in 1922, and Hecht went to Hollywood in 1926.  Mining his Chicago material, he wrote the screenplay for Joseph Von Sternberg’s  Underworld (1927) and  collaborated with Charles McArthur in 1928 on The Front Page.  Hecht and William R. Burnett, another Midwesterner, co-wrote the script of Scarface (1932), a film whose ‘all-but-suffocating vitality is a kind of cinematic version of tabloid prose at its best,’ writes Richard Corliss.    To the argot of Lait and Runyon, Hecht added repartee and faster plotting with unexpected turns.   Hecht never wrote for the pulps, instead spending two-to-twelve weeks a year in Hollywood (earning up to $100,000) before returning to New York to do his ‘serious’ writing.