Hammett, Chandler, and Macdonald tried to make hard-boiled fiction more literary, but other writers kept on working in the pulps, where the genre had begun. Many of these writers had one foot in Hollywood, and they took the characters, plots, and conventions of the hard-boiled to movies, radio, and television as those media developed. Most attention focuses on movies, for talented directors also sought to make art of material aimed originally at a mass audience. Many of these movies share common appearances and themes, forming a genre called film noir. However, hard-boiled fiction was also featured in comic books, radio, and television.

Station KDKA in Pittsburgh inaugurated the radio era in 1921.

By 1928 there were over seven million radios in the U.S. receiving vaudeville, music shows, and live coverage of events such as prize fights, murder trials, and Charles Lindbergh’s trans-Atlantic flight in 1927. “Radio did not discover the detective until 1930,” scholar Leroy Lad Panek notes.1 Actually, it was late in 1929 that C.B.S. radio began to broadcast a version of True Detective Magazine. But in 1930 pulp publishers Smith and Street (True Detective Mysteries) took to the air with stories narrated by “The Shadow,” and in 1932 the show was renamed The Shadow. The Shadow was nameless and dealt with crime that the law could not handle: his famous signature line was “Who knows what evil lurks…”

Sherlock Holmes also began his radio career in 1930, as did several other English and conventional detectives (The Eno Crime Club, 1931-36, The Adventures of Charlie Chan, 1932). In the early years of the Depression, radio featured police shows closely modeled on the derring-do of Cleveland’s Elliot Ness or New York City police chief Lewis Valentine. The warden of Sing Sing also narrated the lives of his miscreants on 20,000 Years in Sing Sing. One of the most popular shows was Gangbusters (1936-45) with Chief Valentine reading. Since radio practiced severe self-censorship, the cops were always good and never abused the criminals, who were not only evil but unsympathetic. Radio embraced a documentary style, sometimes appending to these programs descriptions of “Most Wanted” criminals, beginning with Baby Face Nelson. Edward G. Robinson could be heard weekly in Big Town (1937) with Claire Trevor, but the most prominent pure detective shows were The Adventures of Ellery Queen, (1939-48)

and I Love a Mystery, which featured Jack Packard and Doc Long’s A-1 Detective Agency. Ellery Queen (right) featured a panel of celebrities who discussed the crime before the master put his finger on the culprit. None of these could begin to approach The Shadow however, whose influence crossed over into the comics. In tone, these shows were up-beat and pro-police. True hard-boiled narrative seems to have been too bleak, during the Depression and World War II, for the young radio industry to risk: it wanted to keep its listeners’ spirits up.2 (Right: Ellery Queen)

Dashiell Hammett’s works did not reach radio until 1946, and then in a series featuring soft-boiled Nick and Nora Charles of The Thin Man. The radio version of Perry Mason also began that year. The Adventures of Sam Spade debuted in 1949, but it was over-shadowed by the far better Yours Truly, John Dollar and the inauguration of genre classic Dragnet (1949) starring Jack Webb and Harry Morgan as Sgt. Joe Friday and Ofc. Bill Gannon. Chandler’s Marlowe appeared on the radio briefly (The Adventures of Philip Marlowe, 1947, Van Heflin reading). Scholars James Robert Parrish and Michael R. Pitts list 60 detective radio series between 1930 and 1950 in their survey of those decades. 3

Chandler’s real influence was on television in the 1950s. Philip Marlowe, Private Eye did not appear until October 6, 1959 and followed several earlier imitations of Chandler’s novels: Martin Kane, Private Eye (1949) and Rocky King (1950) were the best. Only twenty-six episodes of Philip Marlowe were filmed, and they departed from the novels drastically, for example giving Marlowe an apartment overlooking the ocean. But these shows pulled television away from the format of radio programs, which dominated such early television series as Barney Blake, Police Reporter (1948), Big Town (1950), Dick Tracy (1950) , Ellery Queen (1950), Dragnet (1951) (right)

and Gangbusters (1952). At the titles indicate, many of these came straight from radio series and were basically unaltered. Philip Marlowe laid emphasis on a charismatic hero, and was soon followed by Peter Gunn (1958) and, later, 77 Sunset Strip (1965). The transition was completed by Cannon (1971), Columbo (1971), and Banyon (1972). Mike Hammer was also on television early (Mike Hammer, 1958) as was Hammett’s Thin Man (The Thin Man, 1957).4 The law enforcement show retained a following. Ever since the late 1930s, when J. Edgar Hoover of the F.B.I. became interested in radio, the police drama held its own. On the radio it culminated in The F.B.I. in War and Peace and on television in the long-running series Dragnet (1951), written by and starring Jack Webb, accompanied by Ben Alexander at first and Harry Morgan after 1967. The long-outdated radio format of this program became part of its appeal. Macdonald’s Lew Archer starred in a brief series (Archer, 1975). There were at least 105 television series about detectives, mostly hard-boiled, between 1949 and 1975, according to Parish and Pitts. 5

Comic strips had been around for fifty years, as a feature of newspapers, but not until the late 1920s did anyone think to publish them alone, in booklet form. The form took hold and grew quickly. In October 1931 the Chicago Tribune-News Syndicate began to distribute “Dick Tracy,” a radically different strip by young Chester Gould. This was a hard-boiled police drama featuring a detective who shot it out with “the rats of society.” Tracy, said Gould, “could toss the hot iron right back at them along with a smack on the jaw.” 6 Tracy was immediately popular, so Publishers Syndicate in 1933 added Dan Dunn, Secret Operative 48. William Randolph Hearst, who controlled King Features Syndicate, told his president to start a crime comic strip immediately: “And I want Dash Hammett to write it,” he said. 7 In January, 1934, Hammett began work on Secret Agent X-9; for $500 a week, he delivered dialogue and continuity for about two years. X-9 sometimes wore a trench-coat, sometimes silk smoking jackets, but he was always tough. In one strip he killed four men in four panels. In “The Mystery of the Silent Guns” he was hit over the head, blackjacked, and shot at as he parachuted from an airplane after the villain. The strip was drawn by Alexander Raymond, who had just invented Flash Gordon and Jungle Jim. He drew those as Sunday features, while drawing Secret Agent X-9 and ghosting Blondie as daily strips. Scholar Ron Goulart finds X-9 a pastiche, with 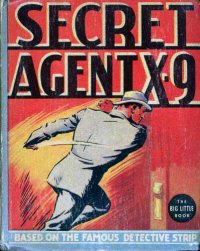 “characterizations which are part Falcon, part Dain Curse, and part Thin Man… with a good innocent blonde in trouble, a double-crossing older woman who continually lies, a wacky professor who keeps disappearing, and a fat con man named Sidney George Harper Carp who talks like Casper Gutman.” 8 When Hammett grew bored with the strip and began to miss deadlines, the project was turned over to the artist. Hammett also consulted on Red Barry, drawn by Will Gould, which critic Anthony Boucher later declared was “vigorously in the Hammett tradition.” 9

Besides Dick Tracy and Secret Agent X-9, the most important hard-boiled comic was The Spirit, drawn and scripted by Will Eisner. Eisner (right) grew up reading detective

magazines: “At that time, the pulps formed the basis of popular story-telling. They were everywhere, and I read as many as I could. [They] gave me a sense of story-telling.” 10 Conceived as a comic book and as competition to Superman and Batman, The Spirit began appearing in mid-1940. The “spirit” was criminologist Denny Colt, who came back from the dead after exposure to deadly chemicals. The Spirit, who wore gloves and a mask but otherwise dressed normally, lived in a cemetery and helped Police Commissioner Dolan with “criminals beyond the reach of the police.”11 Eisner quickly became known for his graphic style. He drew in masses of black and white, with only minor shading, and his panels were irregularly sized and overlapped on the page. Most famous were his “splash pages” opening the comic book. Sometimes almost entirely black, they employed dramatic perspective and full-frame depictions of The Spirit on which the text began. In some, writes comic historian Robert Harvey, “the giant figure or face of the Spirit hovered over the mean streets of the city like a silent guardian of justice.”12 It was often raining, and there was usually a femme fatale named “Powder” or “Olga Bustle,” the latter modeled on Jane Russell. Except for his period of service during World War II, Eisner wrote The Spirit until October 1952. Among the graphic artists he trained were Jules Feiffer and Harvey Kurtzman, one of the creators of MAD, who said Eisner was “the greatest” of the pre-fifties comic book artists. Creator of the later hard-boiled Savage comic Gil Kane adds: “Eisner actually created the first original context for the comics field and gave it a dramatic structure and a way of handling pictures that was different from simply redoing Sunday page strips.”13 Contrasting with Eisner’s graphically was Jim Steranko’s hard-boiled Chandler series in the mid 1970s. Harvey terms this style the “graphic novel.” The story is told in panels in a rigidly rectangular format, but individual panels feature black and white compositions as individually striking as Eisner’s. The pace, however, is dictated by large, uniform blocks of justified copy that average one half the size of the panels. No new information is ever introduced by the drawings. 14